You are here: Home / Alexandria / The Jack Chronicles: Part 1

To say that becoming a dog mom has been an adventure, is not doing it justice. On March 23, after months and months of me begging and pleading, the wonderful Papi Lindo agreed to go look for puppies to adopt. We walked into Broward County Animal Services, and found this little delicious caramel colored puppy that I just wanted to squeeze to death. (Welcoming Home Jack)

Well, fast forward a few weeks and that adorable little mushy ball of fur and puppy breath had morphed into a hyper, self destructive 20 pound animal that all of us were on the verge of giving up on. We’d tried everything. At first, we barricaded him in the kitchen so he’d have space to play… this resulting in my tired, preggo behind coming home every day to a kitchen full of pee and poop. When he got to about 3 months old, and he was sleeping through the night without having to be let out, we decided it was time to leave him in the crate while we were gone. It would train him to hold his bodily functions a little longer, and would get him more comfortable with his crate… made perfect sense. BUT we were both working 8+ hours a day, and Jack would end up being stuck in a crate for 6-7 hours a day (since we left and got home at staggered times). We’d get home, and he’d BURST out of that crate like a Bat out of Hell. Running up and down the hallway, chasing Chech and driving her crazy. We’d take him outside, and throw the ball, play with toys, try to tire him out. “A tired puppy is a behaved puppy” a lot of people would say. I was beginning to believe that the word “tired” didn’t exist for Jack. Then. He broke his leg. 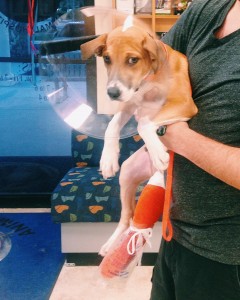 I had gotten home a little later than usual, and Jack was stuck in the crate a little longer than he would’ve liked. I was home for maybe 25 minutes, got Chech changed out of school clothes and ready to hang out with me while I made dinner. I had gotten a package (as my online shopping obsessed self does most days), and Jack was dead set on figuring out what was inside the package. So my natural thought – put it on the table where he can’t reach it. Well, Mr. Jack “I’m Indestructible” Iglesias thought he could spiderman onto the dining room table somehow. He revved his engines from down the hall, and jumped FULL SPEED at the dining room table, falling short, because he’s not a gazelle, and was denied access to the top of the table. Falling back, and “severely spraining, and possibly breaking his back left leg at the growth plate”. A few hours, and a lot of dollars later, we were walking out of Lakeside Animal Hospital – with a 4 month old puppy, a cone of shame and a bright orange cast. 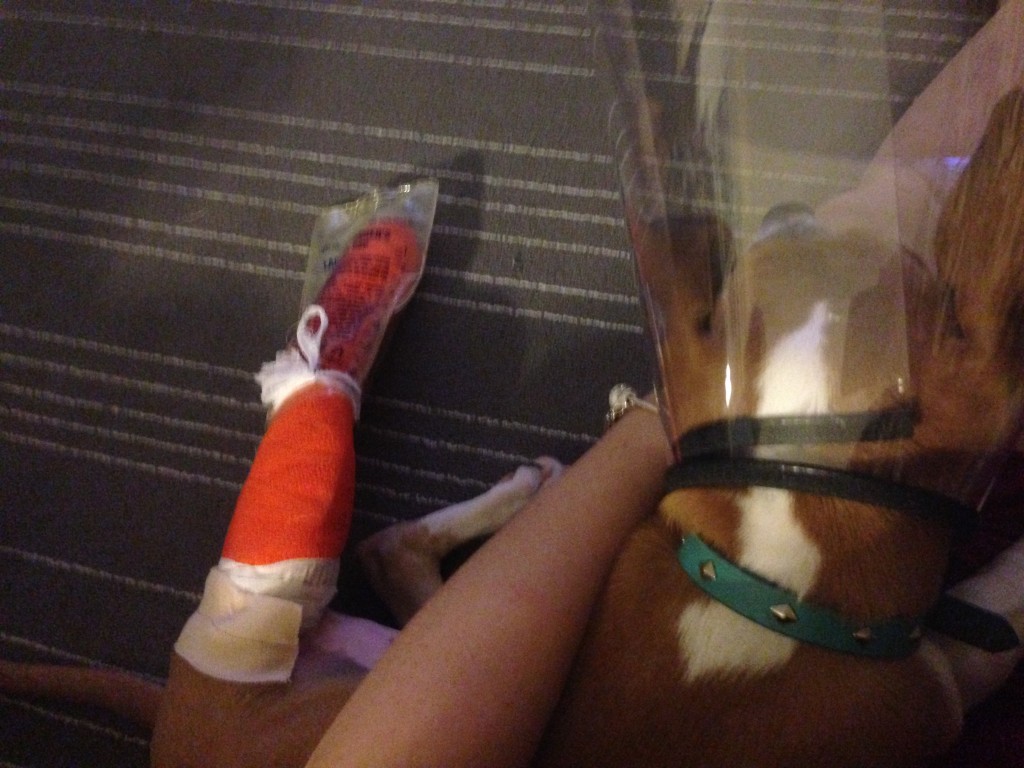 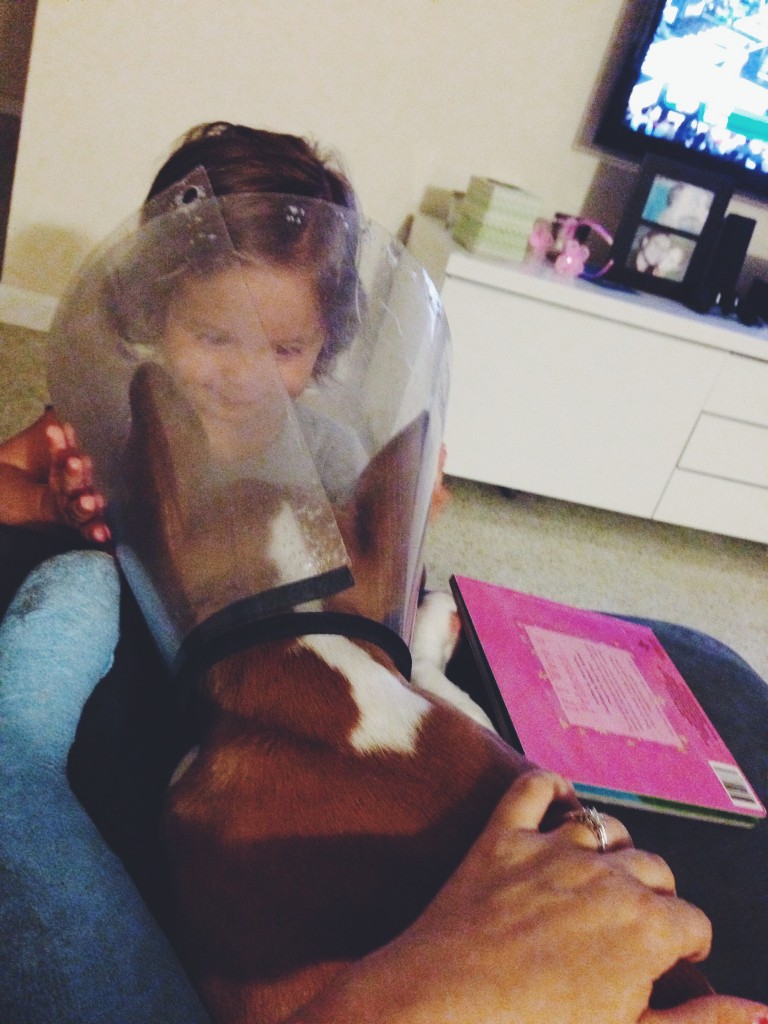 The next few weeks were NOT easy. This dog was, how do you say, the biggest pain in the ass this side of the Mississippi. First, he figured out how to get OUT of his Cone of Shame… then he figured out how to pull out all of the “stuffing” from his cast, allowing his poor little puppy skin to rub on the cast every time he limped through the house. Then, “light” activity, or “confined to his crate” are not words that he was willing to accept. This crazy dog would scratch at the crate, and when we let him out of the crate to go to the bathroom or eat, he’d run around clumsily knocking into EVERYTHING. On top of all that – since he was so young -sometimes he’d pee on his cast when he couldn’t hold it through out the day. Which led to bath fights and a little stinky puppy.

Finally, 6 weeks later, the cast came off, and we found ourselves with an even bigger clumsy puppy. He grew so fast, that during one vet visit, they had to take off the cast and upgrade the size so it would fit more comfortably. Over those 6 weeks, he gained 17 lbs – from 14 to 31 lbs. Nowadays, he’s weighing it at 39 lbs. 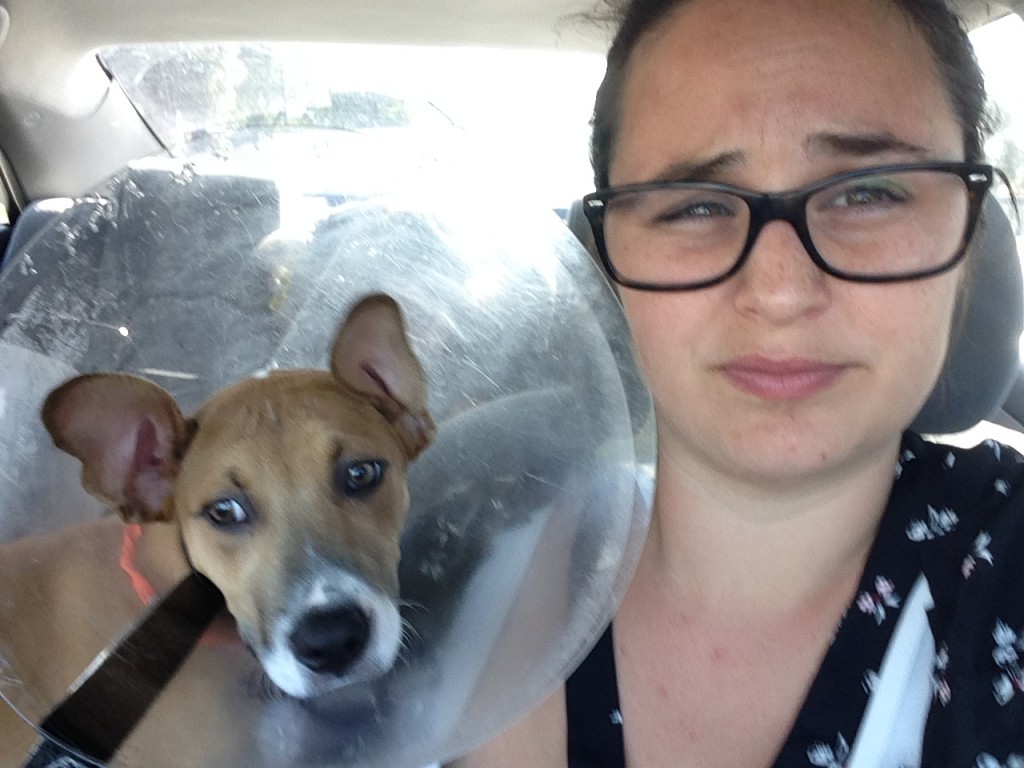 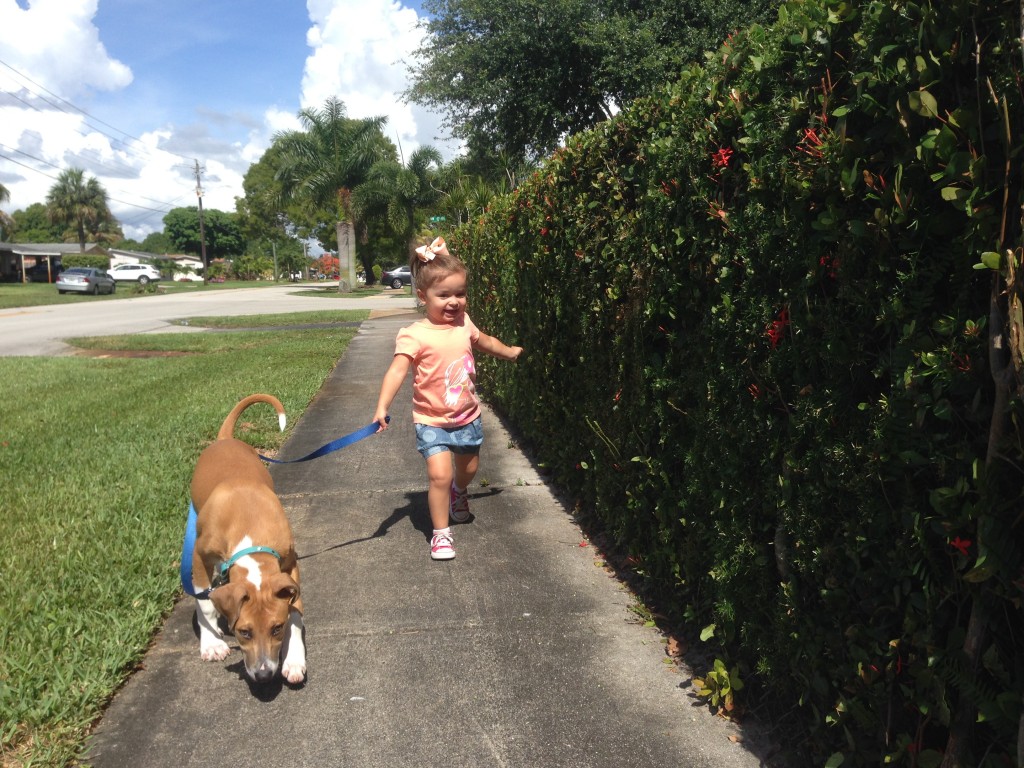 My 5 month old puppy, weighs more than my 3 year old.
Because he had the cast on forever, and because he was always in “pain”, we weren’t as strict with him in our skewed form of obedience training… and the animal has been basically doing whatever he wants. One night we came home a little late, and let him out of his crate, and he bee lined STRAIGHT for Alexandria. I know he was just excited to see her, but the fact that he superman jumped right into her, and knocked her poor little 28 lb body right into the wall opened my eyes that enough was enough. I knew at this point, Jack was NOT under control by any means, and we can’t keep him. We need to bring him to a home where the owners would have time to train him the RIGHT way. I knew I’d be home with him for the summer, and I could “spend some more time training and teaching him the right behaviors… but there’s also only 9 weeks until we have a Newborn and I will definitely NOT have that kind of time for a silly puppy.” I would tell myself. “He’s going to be a big dog, and a good dog, but poor guy needs to be TAUGHT how to behave, he’s not going to learn it over night!” I would tell Javy. “Alexandria, tell him down, and don’t pet him” I would tell Alexandria. None of it worked. And I knew it was time to give him up. I sat down in my bed in frustration, and wrote up a little Facebook & Instagram post, hoping one of my friends would volunteer to take him so we wouldn’t have to give him up to a stranger. 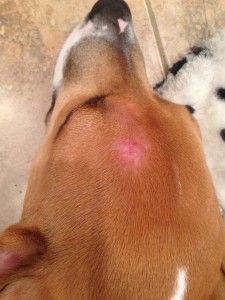 The VERY next day, I noticed something weird about a little patch of hair missing on his forehead. He had a tiny spot, the size of a quarter, where hair was missing and you could see his little lite pink skin. I figured since he’s crazy, he must’ve bumped his head on something and gotten a little scratch. It didn’t look infected or anything, just a tiny spot of missing hair. Then another spot popped up next to his cheek, and this one looked a little red and swollen.

And this is why Mom’s can’t have puppies… Nervous that now he’s got some kind of super infectious disease that was going to render him crippled, I called the vet. We took him in, and I was half right. He didn’t have anything that was going to make him crippled, but he did have a little infection and some skin parasites that needed to be brought under control. Due to the “stress” and little man’s immune system being “compromised” due to the broken leg – we’ve developed a “Demodex Mange” outbreak. Not contagious to people (thank god), but Demodex is basically an overpopulation of naturally occurring mites on a dog’s skin. Unfortunately for Jackity Jack – the outbreak areas are on his head and face – making it easy for him to scratch and irritate the spots even more. Never. Ending.

At this point, I was getting messages here and there from people interested in meeting Jack. ‘I have a friend who wants a big puppy to run with!’ PERFECT I thought – Jack would be an awesome running partner. But they’d have to be careful because he did just break his leg, and if they pushed him too far it could break again… and then it’d be their turn to pay $1000 for a cast, and antibiotics and special baths. But what if they didn’t want to?! What if they brought him to the pound? What if they then tried to get rid of him! Pretty ridiculous right? Not to mention, how in the world would I explain to Alexandria that we were going to bring Jack to a new home. She told people he was her “best friend”, and she’d try to hug him all day long, and he’d puppy nip her little fingers.

We couldn’t give him up.

That leads us to where we are today. 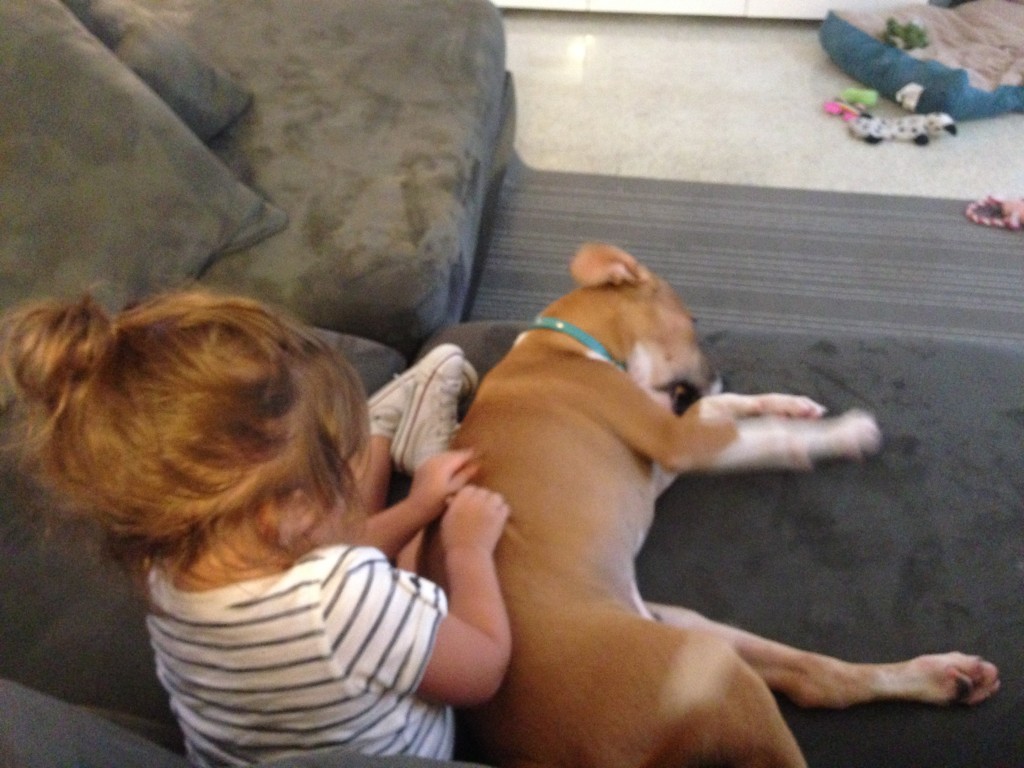 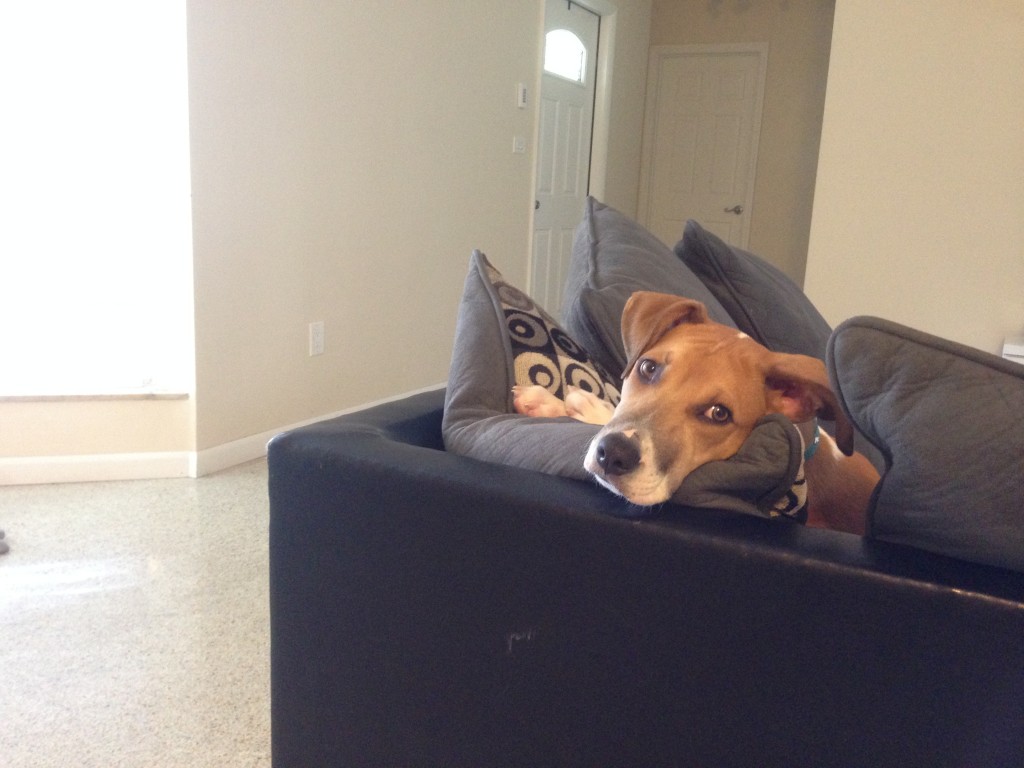 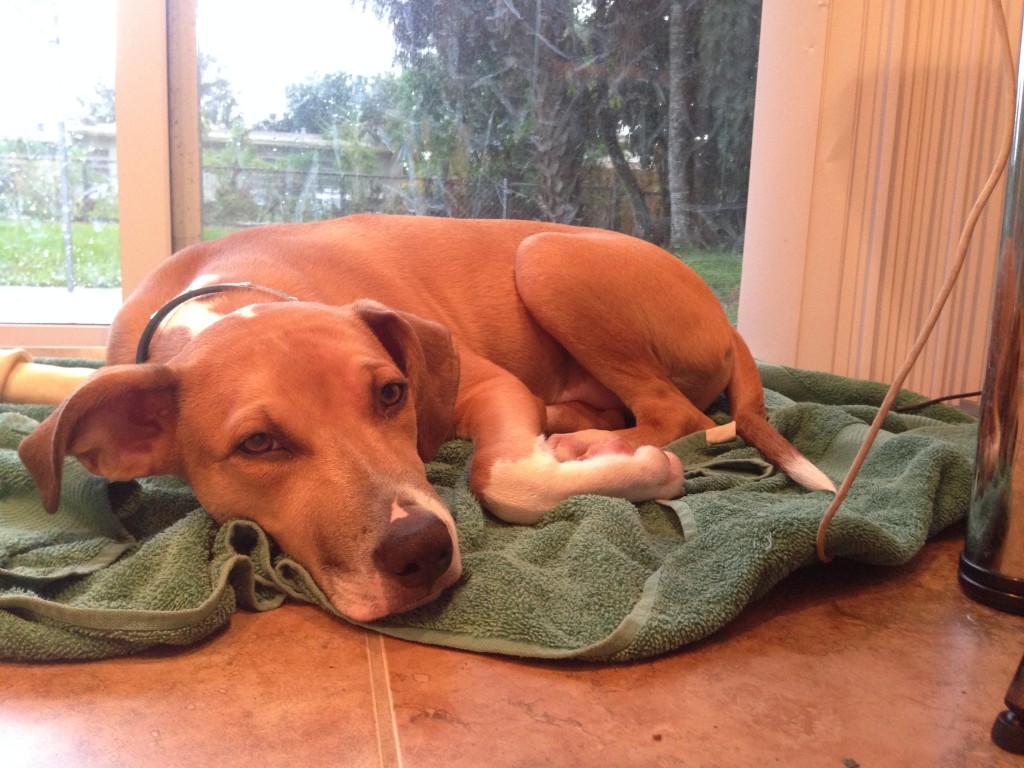 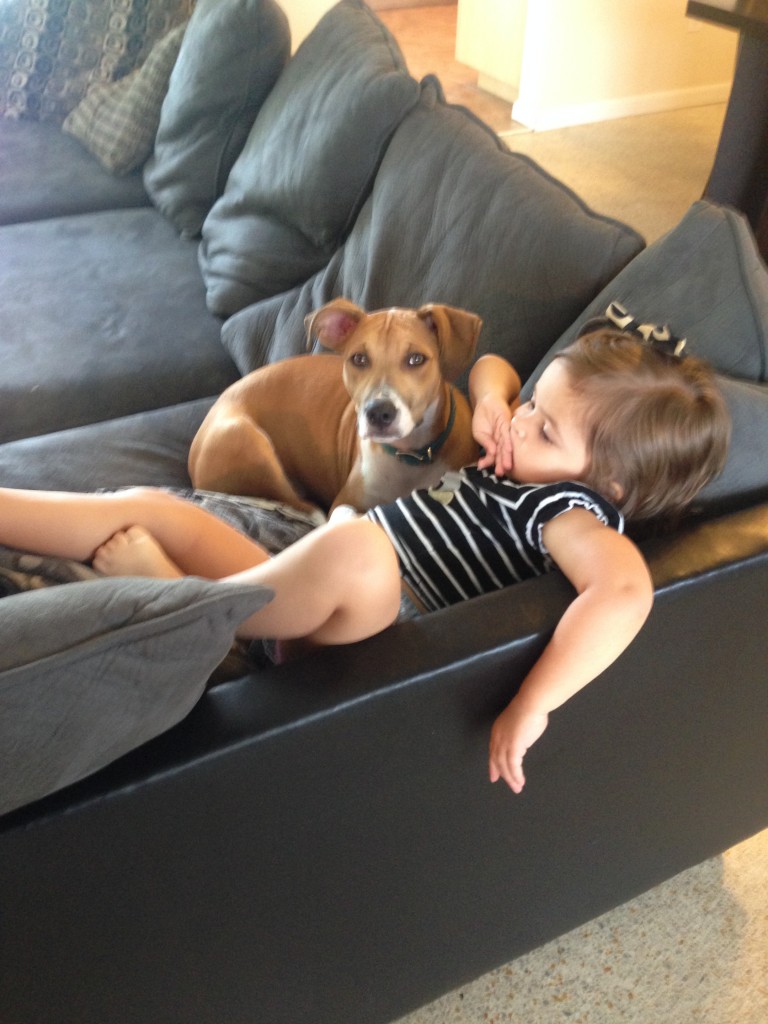 Today, we start Obedience Training, and will be going every Wednesday, for the next 6 weeks.

I’m praying this turn’s Jack the Gentleman – BACK into the little Gentleman he was when he was a puppy.

Here’s hoping! Stay tuned for the Jack Chronicles over the next few weeks… as I share all the fun stuff we’re learning, and Jack’s progress. 🙂